A walk through Dante's Florence

Walking through Dante's Florence, 700 years after his death. 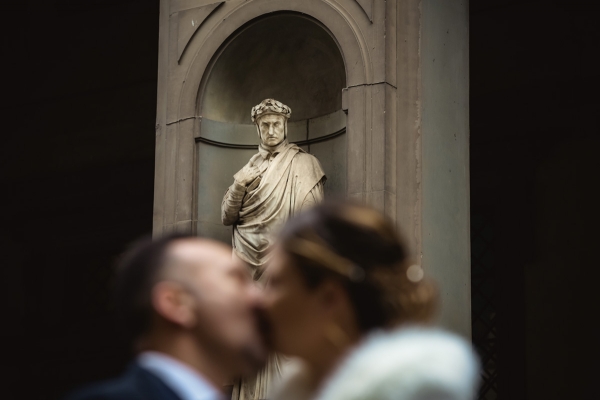 Dante, the great poet, was born in 1265 in Florence and died in exile in Ravenna in 1321. This year, therefore, marks 700 years since his death and this anniversary can be a nice opportunity for a photographic tour to discover the testimonies of his presence and search for his traces in the city.

Florence for Dante was inevitably a place of love - for the city and for Beatrice, his true love even if he married another woman - and pain - he was exiled by his fellow citizens in 1302 , as highlighted in many passages of the work that made him immortal, the Divine Comedy.

Enjoy, Fiorenza, since thou art so great,

That by sea and land thou beatest thy wings,

And through hell thy name is spread!"

Canto XXVI of the Inferno

The Florentine poet lived the first 35 years of his life in a city in full turmoil, not only from a political point of view: also with regard to urban development, the 'lily city', in the last decades of the thirteenth century was a real open-air 'construction site' that reflected, in a certain way, its social dynamism. 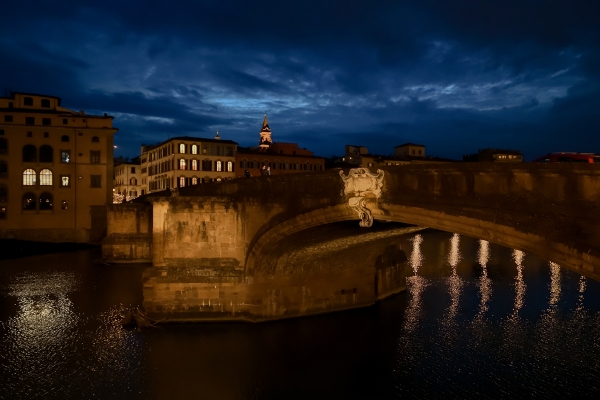 The first circle of walls that Cacciaguida - another well-known Florentine poet who dialogues with Dante in the Divine Comedy - describes as the "ancient circle" was no longer sufficient to perimeter the city in full demographic expansion, well before Dante was born: the growth of the city's population caused by the 'immigration' of people from the Fiesole area - Fiesole is a small town that stands on one of the hills surrounding Florence - made it indispensable, in 1173, to build a new city wall that circumscribed an area of ​​95 hectares,  five times higher than that dating back to Roman time. Not only so that Florence, in its urban aspect, could be the mirror of the prestige that it was acquiring more and more, it began to dress itself with architectural works worthy of such a city.

Legend has it that Dante spent some time every day, sitting on a stone - now called the 'Sasso di Dante' - to observe the construction of the cathedral of Santa Maria del Fiore by Brunelleschi, called the Duomo by the Florentines.

There are many places where you can read a passage from Dante and there are many monuments that saw the light in the period in which the Supreme Poet lived in the city. In fact, in the last decades of the 13th century, symbolic buildings were founded, such as the aforementioned Cathedral of Santa Maria del Fiore, Palazzo Vecchio, the Basilicas of Santa Croce and Santa Maria Novella. 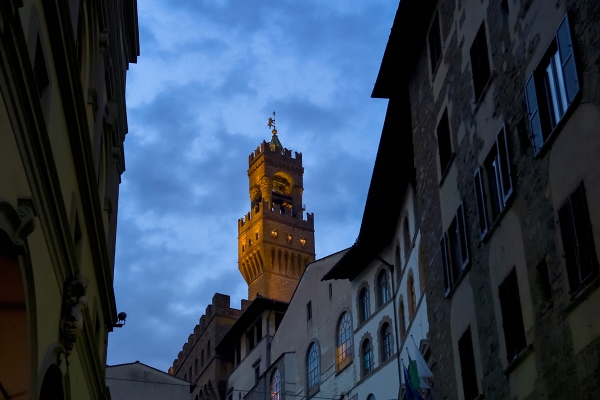 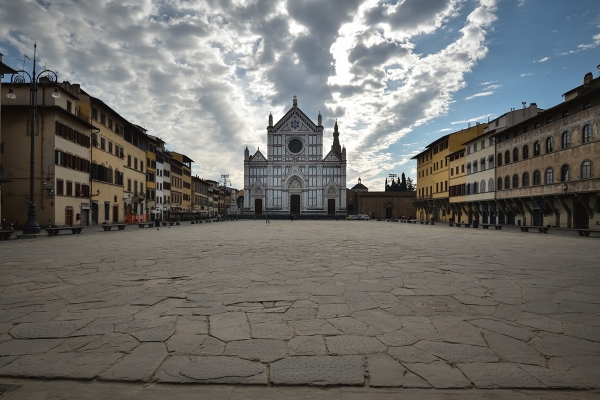 One of the places, together with the Baptistery, which most closely resembles the spirituality typical of Dante's time is undoubtedly the evocative Romanesque Abbey of San Miniato al Monte, mentioned in the seventh canto of the Purgatory. But besides these places - experienced more or less directly by the Supreme Poet - there are many other testimonies, from every period, which document how the city is deeply interwoven with Dante's spirit. Walking around Florence one often comes across numerous portraits of Dante: the famous one in Piazza Santa Croce right next to the basilica from which the square and the district takes its name. There, the large statue of Dante, seems to look defiantly at his fellow citizens, some of whom were responsible for his exile, holding in his right hand his work, the Divine Comedy. Another statue of Dante can be found in the loggia of the Uffizi along with those of many other characters who made the history of the city, between the columns near the entrance to the famous 'Gallery'. 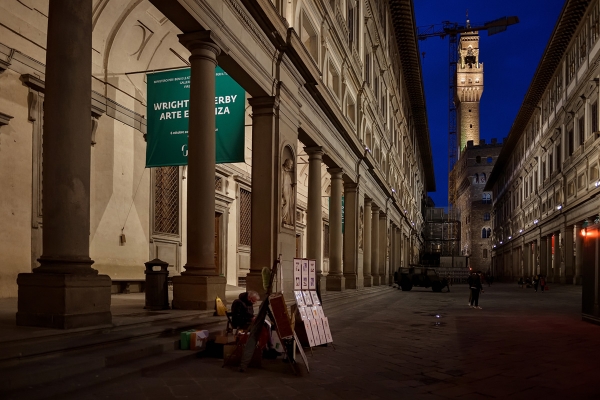 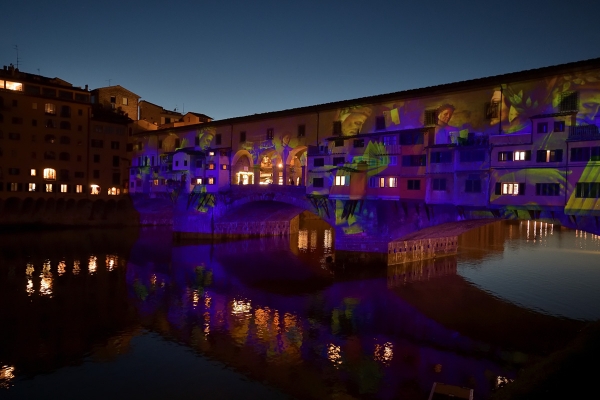 Walking in the city we will take a step back in time, in full pre-Renaissance period and the 33 famous Dante's tombstones, concentrated mainly in the medieval quarter, will tell us about the life of the poet.

This photographic tour, which we will try to do in the late afternoon when the city is tinged with the red of the sunset and the narrow streets of Dante's district come alive with people, will take us to discover a lesser-known Florence than the iconic one of the Renaissance. Those who wish can taste a sandwich with Lampredotto - a typical dish of medieval Florentine cuisine made with abomasum, one of the four stomachs of cattle, boiled and chopped - in one of the kiosks at the beginning of Via Dante Alighieri, served in bread 'without salt' whose tradition is also praised by Dante himself in a verse of Paradise:

Thou shalt experience how salt tastes

The bread of others, and how hard is the way

The going up and down the stairs of others. 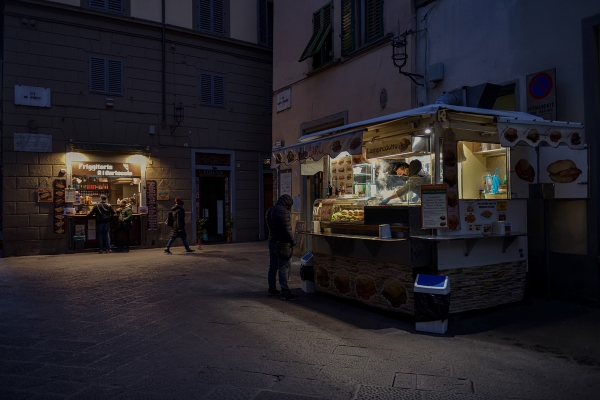 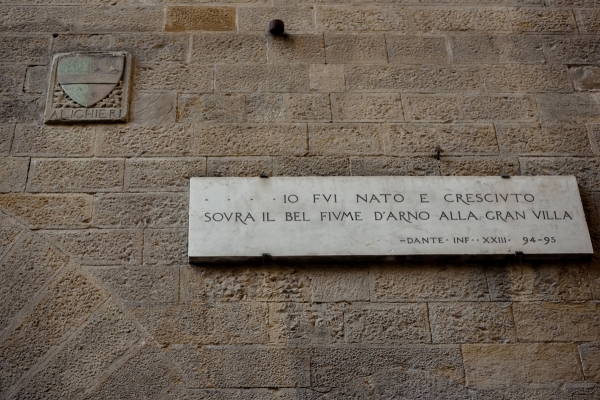 We will go, walking through the narrow streets of the center, in front of the house where Dante lived his childhood and in the church where he got married, in spite of himself, to Gemma Donati, the daughter of one of the richest and most powerful families in Florence at that time. The so called Dante district also includes the tower house, where Dante spent his childhood, his birthplace, transformed into a museum, the Badia Fiorentina and the Torre della Castagna (the only tower with a round base in Florence).

We will cross the Ponte Vecchio at the beginning of which a triplet, taken from the Inferno, reminds us of the cause of the civil war between the two opposing factions that contended for Florence: the Guelphs and the Ghibellines. This was the beginning of a period of bloody battles that indirectly led to the exile of the poet who never returned to Florence. Not even after his death were his remains transferred to the city. Dante in fact rests in Ravenna, in Romagna. 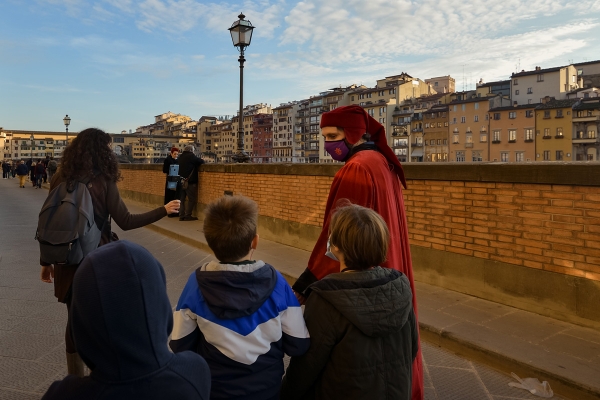 Marasco, a great Florentine popular singer who died a few years ago, in one of his famous songs, puts these words in the mouth of the Supreme Poet: O Florentines you have exiled me, take the shit that God must send.'  As if the flood that swept over Florence in 1969 was a sort of divine punishment for what his fellow citizens had done to him.

In short, we will spend an afternoon in a different Florence, with the aim of discovering and photographing Dante's Florence and how the Florentines, perhaps as a sort of posthumous apology for having exiled him, paid homage to the Supreme Poet.

If you would like to book a Walk through Dante's Florence with our local photographer, find out more here...