Like most countries worldwide, the South African Government decided to enforce strict lockdown regulations in March 2020, requiring almost every citizen to stay home to slow down the spread of the Corona Virus. For 3 months, wildlife reserves and local parks were vacant, enjoyed only by birds and animals.

By June 2020, the South African Government began to allow people to exercise in local nature reserves, with strict safety protocols implemented. This was called Lockdown Level 3.

I decided to visit Modderfontein Nature Reserve in July.  Modderfontein is one of my favourite local reserves in Johannesburg, South Africa, for raptor photography.  I have seen as many as 7 different species of raptors there in one morning.  It is a birder’s and photographer’s paradise.  Modderfontein is a mixed-use reserve and includes a popular mountain biking area called Taroko Trail Park. 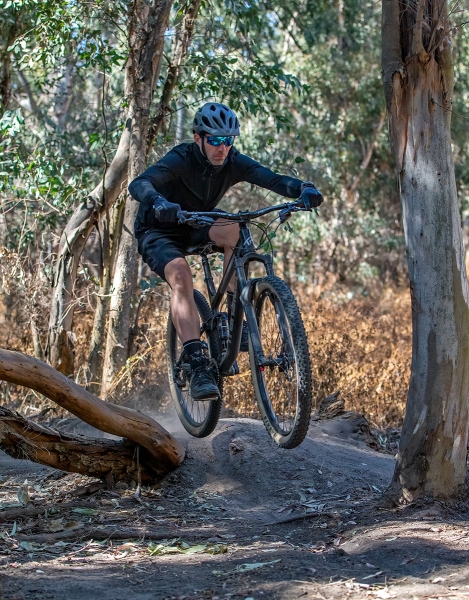 After a successful day of photography, I posted a few raptor photos to Facebook. I soon received a message from a passionate cyclist named Dieter Zermatten.  Dieter told me that a bird of prey had been attacking cyclists on one of the mountain biking trails. Dieter also shared the following post and photo by fellow cyclists:

Firstly, the single track is looking GREAT! thanks to the guys for all the work there.

…My encounter yesterday was a first for me!

…I am blitzing through Modders on my Rocky Mountain and get to my favourite part - the River Section!

I enter the trees and ride over the new bridge section and over the older wooden bridge.

I duck under a very low tree and a few seconds later, a grey bird flies right in front of my face...I write this off to timing and perhaps a misguided pigeon.  My focus is all on the trail as I carve the corners as fast as I can....BAM something smacks me on my helmet! As I was still debating to myself if this was a branch I might have missed... BAM another aerial assault that was so hard, it knocked my helmet forward. Sprinting on the return leg I got tagged once more before I exited the trees. I do not know what bird smacked my helmet 3 times, but I hope we will not be disturbing a nesting pair in those trees!  Please take care in this section! Perhaps the bird watchers can determine what bird it was...I was not going to hang around to pick out the colour and shape. 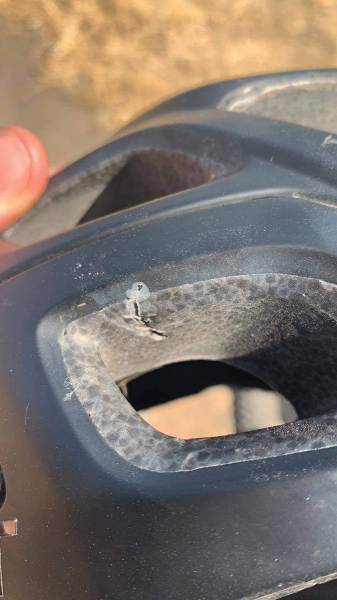 The photo showed strike damage to the top of a bike helmet from a raptor’s talons. Because I love raptors and am keen to photograph them in unique situations, I was intrigued, and asked Dieter to give me an approximate GPS pin drop of the location.

In early August, I was able to follow up on the info Dieter gave me. The nest was not accessible via vehicle, so I took my bike and cycled about 3 kilometres to get to the location, carrying all of my heavy photographic gear in a backpack—several cameras, large zoom lenses, and a monopod. I easily found the spot because the bird began calling frantically about 100 metres away from the nest while I was cycling on the path and aggressively flew over me. I instantly identified the bird as a Black Sparrowhawk (Accipiter melanoleucus).

I dropped my bike. As I started walking slowly onwards, the bird became more relaxed with my presence and landed near its nest, which housed two young Sparrowhawks. I managed to take a photo of the Black Sparrowhawk perched on a branch and a photo of the two juveniles on the nest. I could see by the size of the youngsters that they would probably fledge (begin flying and leave the nest) within 10 –14 days. After finding the Black Sparrowhawk’s nest, I understood why the bird was so aggressive towards cyclists on the trail; it was protecting its young, like a good parent should. 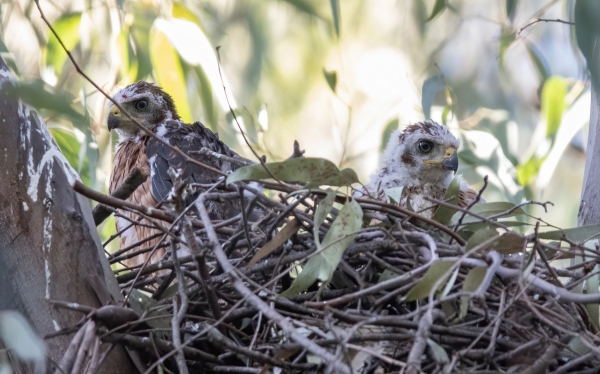 I returned to the same spot about two weeks later, and saw that the juveniles had left the nest as expected. The adult Black Sparrowhawk was still there, and I was lucky to get a photograph of this beautiful raptor in flight next to the forest area where they nested. As I stood there watching it, I saw a cyclist on the trail and I saw the Black Sparrowhawk actually swoop down low towards the cyclist’s head, almost touching the helmet. I was surprised to see that the Black Sparrowhawk was still trying to drive cyclists away, especially after the youngsters had fledged from the nest. 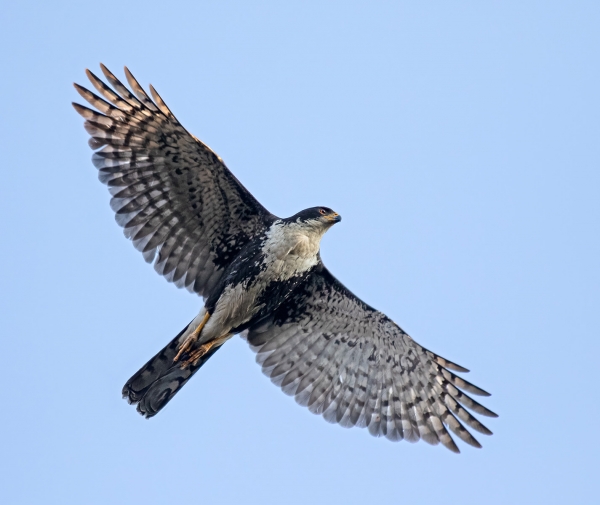 I spoke to Dieter again and he raised an interesting point. Dieter had been cycling in Taroko Trail Park for over 6 years and he had never heard about birds attacking any cyclists at this spot before. He thought that the birds started to breed there before the South African Government moved to Lockdown Level 3. On 1 June 2020 (initiation of Level 3) when the cyclists returned to the reserve the Black Sparrowhawks had already committed to nesting there and this is when the conflict between the birds and the cyclists started.  After seeing the Black Sparrowhawk attack the cyclists myself and thinking about how many times this bird must have done this in the past 2 months, I thought, wouldn’t this be such an interesting story to publish? I would love to share this beautiful raptor’s amazing character with the rest of the world, helping raise awareness of the behaviour of birds around nesting sites.

I asked Dieter if he would like to help me to document this interesting interaction between cyclists and Black Sparrowhawks. Dieter and I planned to meet up at the reserve the next day to photograph the bird’s behaviour. I knew I had a small window of time, suspecting that the adults might leave the area by the following week.

In preparation for this photo shoot I borrowed a Canon 1DX because I needed a camera that could shoot action in extremely low light. The learning curve was quite steep on the first day, as I set up at the wrong places. I brought a Canon 70-200mm f2.8 MK II lens, but needed more reach for the photo I envisioned.  I noticed that the bird would start swooping each time a cyclist rode by but did not commit to the attack. I suspected that it was distracted by my presence.  Needless to say: I did not manage to get any photos worth sharing on my first attempt.

I decided to try a Ghillie Suit, a camouflaged suit that makes you look like a bush, so that I could blend into the environment a little more. I was sure that if the Black Sparrowhawk did not detect my presence, it would not alter its behaviour while Dieter cycled the route. I hoped the Black Sparrowhawk would commit to its attack like it had been doing since July 2020. On 19 August 2020, Dieter and I returned to the location for the last time to document this amazing Black Sparrowhawk behaviour. It was an extremely cold morning with a freezing wind as a cold front moved through Johannesburg. This time I brought two lenses, one camera body, the Ghillie Suit and a monopod. It was quite some work to get all my equipment to the location on my bicycle in the bitter cold. 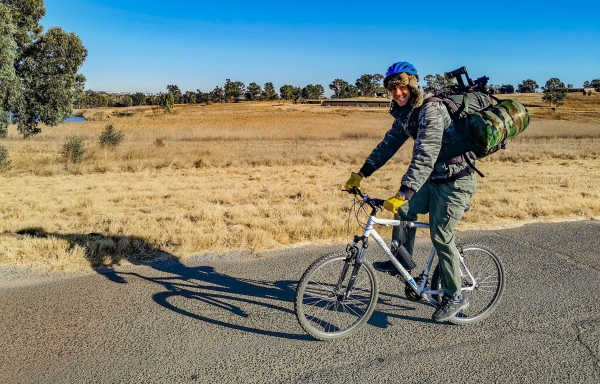 This was our last attempt and I had to make this one count.  I had a better plan of action this time: I was sure that if Dieter could cycle to the back of the forest where he could access the route about 200 meters on the opposite side of the nest, it would catch the attention of the Black Sparrowhawk, allowing me to sneak in to the spot where I want to set up undetected by the bird. All raptors have great vision and Black Sparrowhawks are extremely intelligent, so I thought to myself that I probably had one chance to get the photo I envisioned: a close up of the bird attacking Dieter. My gut told me that the bird would detect that I was dressed like a bush and wouldn’t get anywhere near me again after my first attempt. 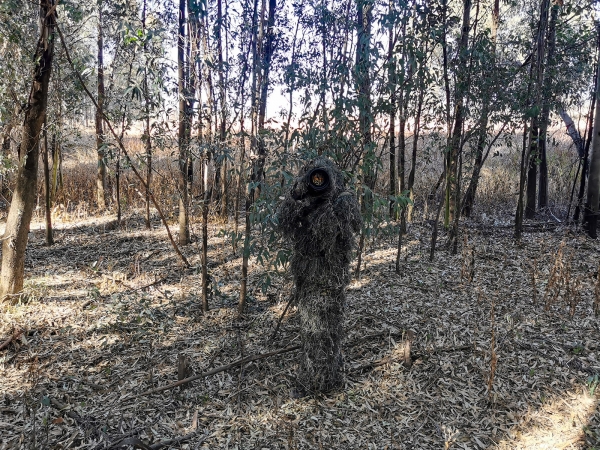 I put on the Ghillie suit. I decided to attempt a high-resolution photo using the Canon 300mm f2.8 MK II with the Canon 1DX. I checked my settings and decided to shoot in Manual Mode using 1/2500 of a second to freeze the bird, at f2.8 to give the shot as much light as possible but giving me a shallow depth of field, and ISO 4000 because the forest was relatively dark. 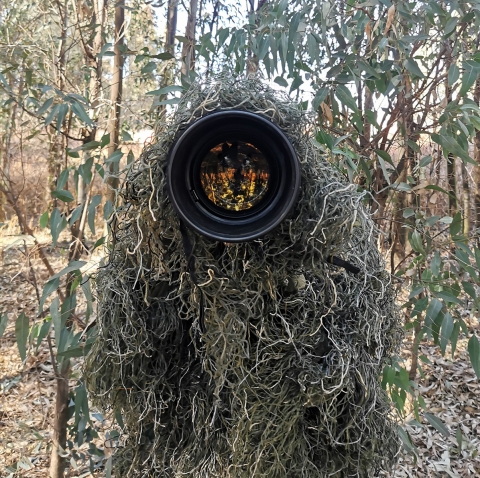 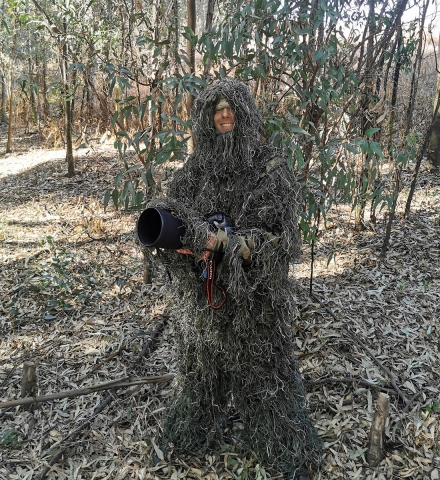 I was set up and ready for action while hiding inside my Ghillie Suite. It was quiet for a while, then I saw Dieter approaching. I could hear the Black Sparrowhawk calling. This was it! I had one chance to nail this photo and get both subjects sharp with very little depth of field …this was quite risky. I took a deep breath and concentrated on keeping the focus on Dieter as he approached me. I began to fire off the camera as he got closer and closer...then he filled the viewfinder. As the camera’s shutter fired, I could see a blurry object swooping above Dieter’s head at high speed. My heart started pumping faster…I might just have nailed this shot. I checked the back of the camera and to my surprise I actually managed to get a high-resolution photo of the interaction between Dieter and this amazing Black Sparrowhawk, the photo I envisioned.  I was elated! 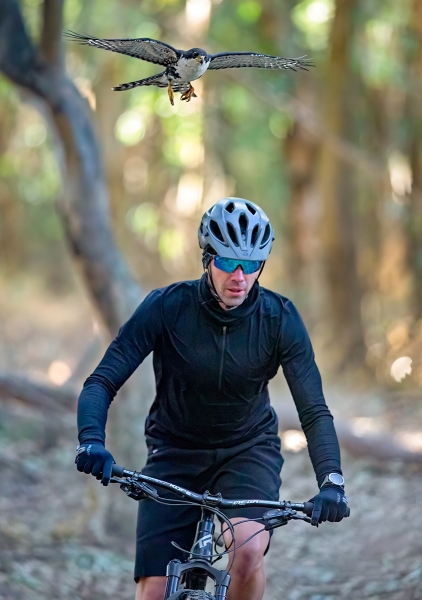 Dieter did a few more loops around. I switched to the Canon 70-200mm f2.8 MK II lens on the Canon 1DX to get more interaction shots of Dieter and the bird, but this time with more of the Black Sparrowhawk’s habitat in the photo. I managed to get 2 shots illustrating this, and each time, the Black Sparrowhawk pulled away earlier and earlier and farther away.  My initial gut feeling was right when I thought that I would have one chance with the Ghillie Suit.  I was so relieved that my plan worked out and that I did not miss my one opportunity. 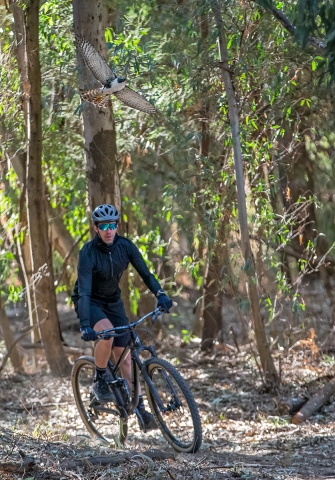 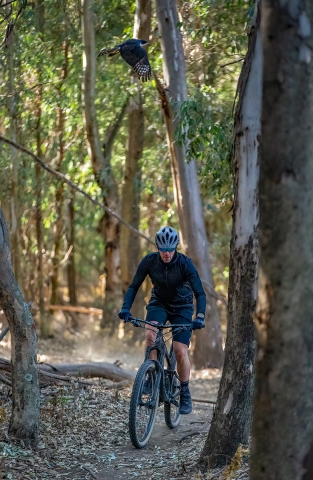 If you'd like to lean more about photographing raptors, go to www.clik-trip.com.